The following feature, headlined “Playground Built, Dedicated in Memory of Ptl. Jay Marles” when it was published in August 2015, combined photo coverage of the all-volunteer effort to build and name a new Ocean Gate Borough playground after a borough officer who was killed nearly five years earlier. Then as now, it was the sole coverage for the fantastic event and helped boost readership toward the 150k+ per week numbers in subsequent weeks.

OCEAN GATE – Early last Friday, July 31st, volunteers of all ages, from multiple emergency response agencies and the local community, and by the dozen arrived to the once and future playground on Wildwood and East Atlantic avenues, here, dedicated to providing a full day or more of service in the memory of Ocean Gate Police Ptl. Jason “Jay” Marles, who was killed by a driver under the influence on the Garden State Parkway on Thanksgiving Eve 2010.

For hours they checked plans, dug post foundations, cemented and fit new equipment in place and graded soil under direction of Where Angels Play Foundation members, whose partnership with the borough allowed the new playground to be built according to its mission of providing “hope, recovery, and a return to family values in the wake of senseless violence and tragedy.” 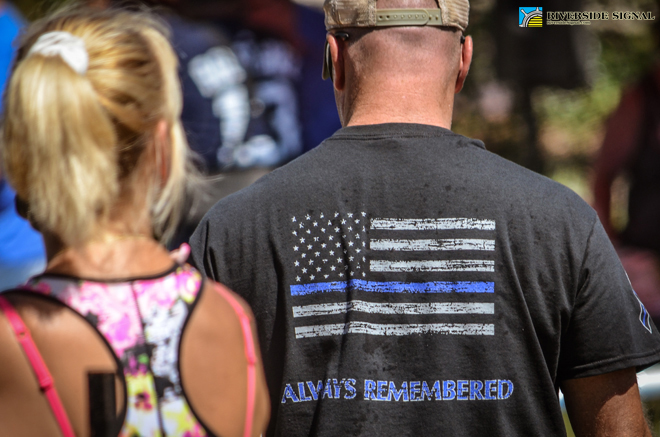 By mid-evening, with help from the borough and council public works and buildings and grounds employees, coffee by the Bayville Wawa, donuts by Pine Beach Dunkin Donuts, lunch courtesy the Anchor Inn plus equipment donations by Jersey Rents of Bayville, Home Depot of Lacey Township, and a donation by Ocean Pipeworks, among others, the volunteers succeeded in completing much of the construction work, returning the following day to finish up some grading and grounds improvements.

With one more touch – the installation, beside a new flagpole, of a cement base bearing the inscription “Officer Jay’s Gift to Ocean Gate” and handprints from his mother and step-father, Pat and Joe Engrassia – Ocean Gate’s newest and much-requested playground was ready for its unveiling the following day. 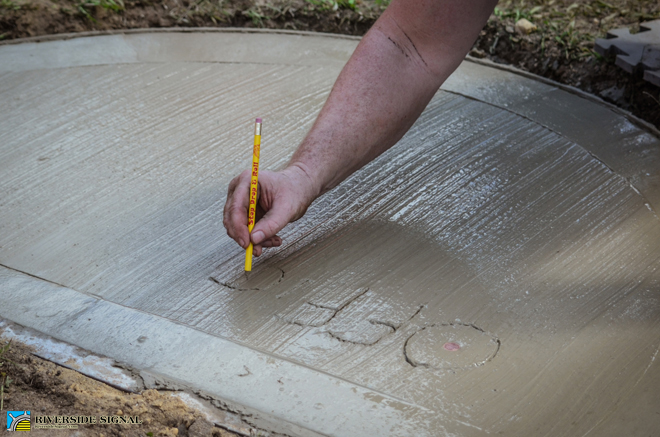 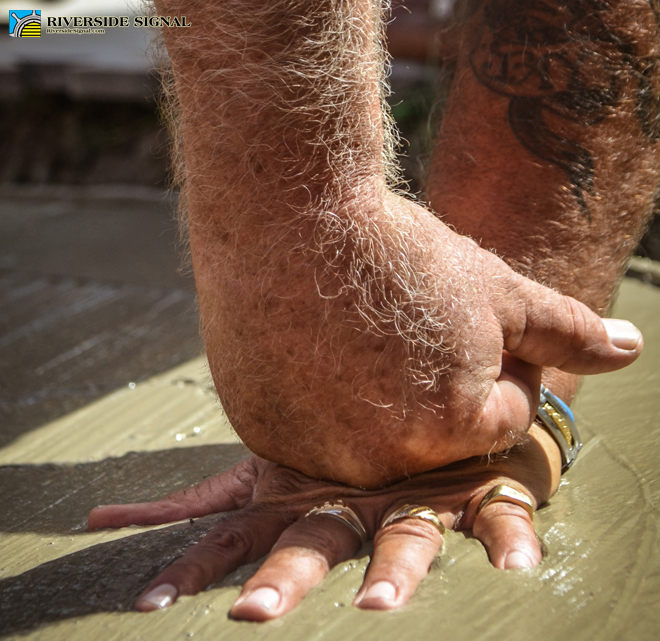 Dawning hot but gorgeous with passing white clouds, Sunday saw the arrival of uniformed police men and women, fire company and first aid squad members plus local residents, family and friends of the late Jay Marles to this grassy corner lot where once stood the Recreation Building and an older, demolished playground to rededicate the land in the name of the fallen local hero for the children he served in his popular role as “Officer Jay.” 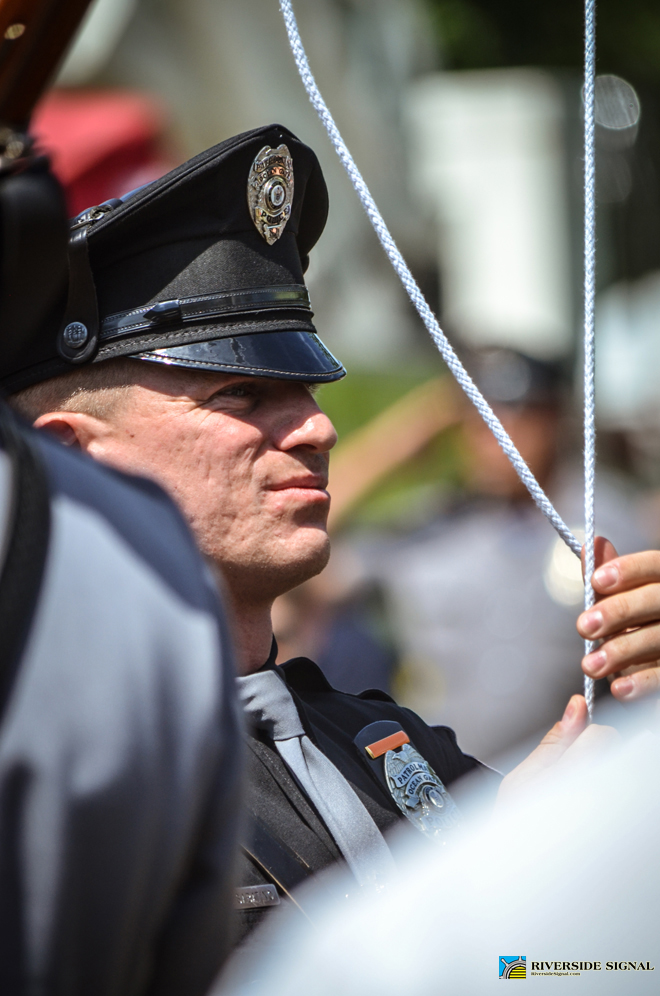 Recalling a story told him by Chief Reece Fisher, Ptl. Marles’s friend, borough native and co-organizer of the new playground, John Bourke, laughed that the chief “couldn’t get a hold of Jay on the radio for about an hour, and what was Jay doing? He was playing basketball with the kids and didn’t have his radio on, and I know he kinda got chewed out a little bit for that but, you know, that’s just Jay.”

More laughter and smiles than tears marked the occasion dressed with a large American flag hung off a Bayville Vol. Fire Co. ladder truck above the Ocean Gate Police Department’s patrol SUV that bears Ptl. Marles’s badge as above a single-engine aircraft circled and towed a sky banner that read, “A GIFT TO OCEANGATE LOVE OFF. JAY “LATER…” 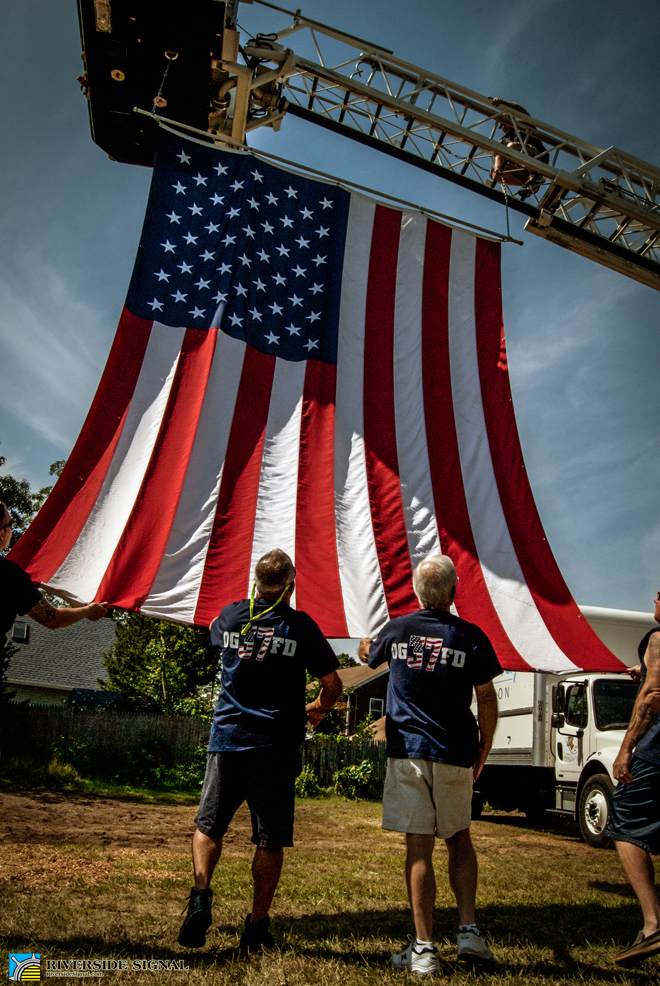 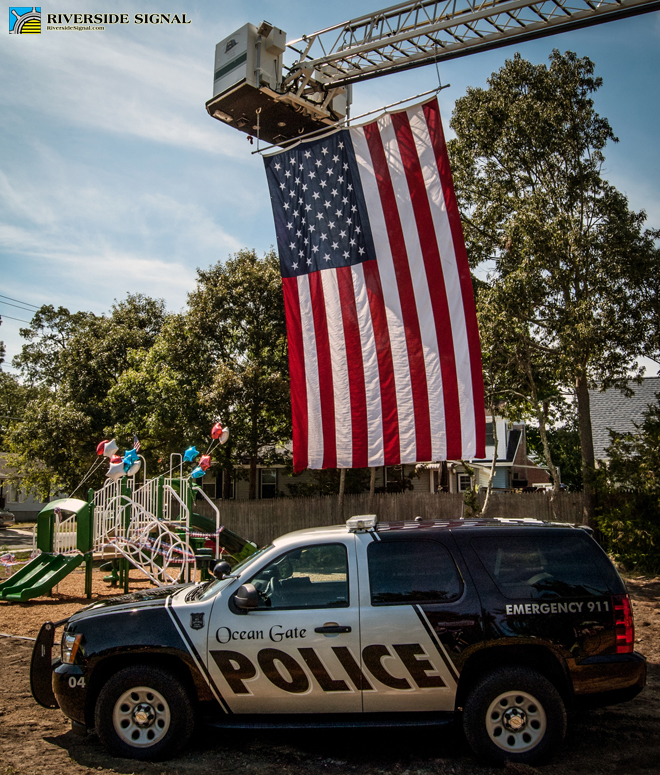 Foundation Founder Bill Lavin opened the ceremony with the singing of the National Anthem by resident Terri O’Neill, a Pledge of Allegiance and moment of silence for “all of our angels, all of those who cannot be here today, our men and women in the armed forces, our EMTs, our firefighters, our police officers, our teachers [and] the angels who inspired us to begin Where Angels Play, the 26 from Sandy Hook Elementary School, and today, in a very special way, our hero, Jason ‘Jay’ Marles.” 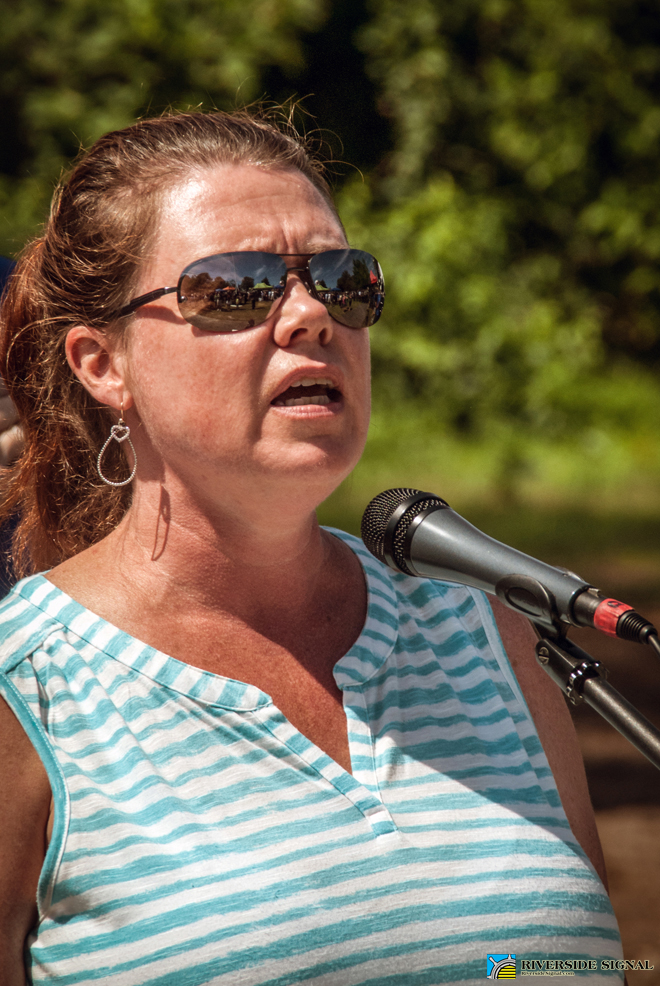 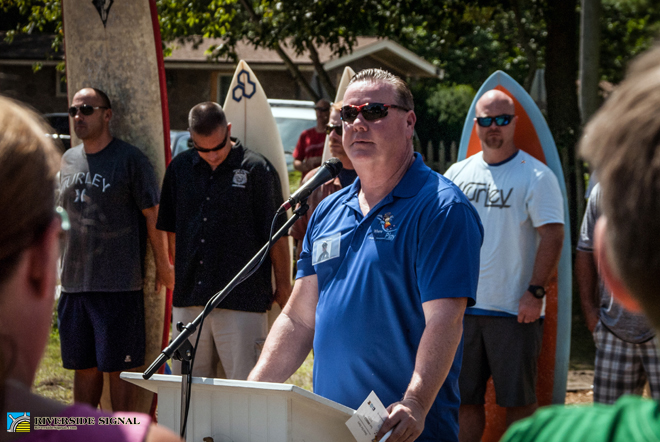 Mr. Lavin next outlined some of the history of his foundation, it having built playgrounds in Mississippi following Hurricane Katrina and in honor of the students killed by a violent and disturbed 20-year-old male in Newtown, Connecticut in December 2012, and that continuing its mission in Ocean Gate for its 32nd project made them “thrilled to work here with Jay Marles’s family, to find out about him, and thank you to all his friends and family for sharing all of the incredible stories.”

He added that the marriage of his daughter to Bill Bourke of the Bourke family, longtime residents of Ocean Gate, one year to the day earlier, helped bring the memorial playground into existence through awareness of the late patrolman’s untimely death and interest for the family, friends and community to heal.

Mayor Paul Kennedy echoed Mr. Lavin’s comments and thanked the Bourke family as “without them, without Johnny calling me a while ago, setting up this meeting with Where Angels Play with Bill and MaryKate, none of this would have happened – it is a miracle.”

Over the past several months and years, Ocean Gate residents had called for a renewed playground on the site of the old, broken and often vandalized one that once stood beside the century-old wood-framed Recreation Building – originally the first borough fire company – until it burned in November 2009. A local parents’ group raised funds and slowly the idea formed to bring it together with the borough committee dedicated to raising its own funds for a then-unknown project in the memory of Ptl. Marles. Further funds that successfully brought the new playground into existence were added by the borough from part of the earnings of a cell tower contract lease. When John Bourke called Mayor Kennedy to include the Where Angels Play Foundation, the entire project came together with the foundation and its contractors helping coordinate its installation.

The mayor added praise for the approximately 100 volunteers who built the playground and tasked local children with making “sure it stays the way it is so we can keep on growing it.”

Mr. Lavin noted that the playground as it stands now would be expanded with swings, riding toys and further project design and development in the coming fall and spring.

John Bourke next spoke, thanking all those who provided food, equipment, drinks and more to the volunteers, the volunteers themselves – many coming from local and county law enforcement departments – and “just from the bottom of my heart to Joe and Pat and the entire Marles family – I want to thank you. I know you guys – Joe was yelling at me, ‘Why are you thanking me?’ It’s, like Bill says, this is also selfish as well. This makes us feel good. it just feels good to help you guys out as well, so I want to thank you.”

Mr. Lavin noted that John’s son, five-year-old Jack, was the official first “tester” of the playground ahead of anyone else once it was completed.

During the course of the ceremony, a representative from Congressman Tom MacArthur’s office presented Jay’s family with a proclamation honoring his life; surfing friends of Jay’s, led by George Brown, presented his mom with a photo of Jay surfing, placed leis on family members in honor of Jay’s love of the sport, and stood for much of the presentation holding surfboards upright against their backs; a special Where Angels Play flag was raised below the American flag on the new flagpole as Dennis Bourke and his other son, Bill, performed an original song for the occasion with acoustic guitar and percussion; playground contractors Rich Picerno and his wife, Toni Giordano, spoke about the joy of working with Where Angels Play Foundation for years and the emotional feeling of giving back to the Jersey shore now and in the wake of Hurricane Sandy; and Monmouth University soccer coach and friend of Jay’s, Brian Hirshblond, noted the late patrolman’s love for that sport as well, presenting the family with soccer-themed gift bags to distribute. 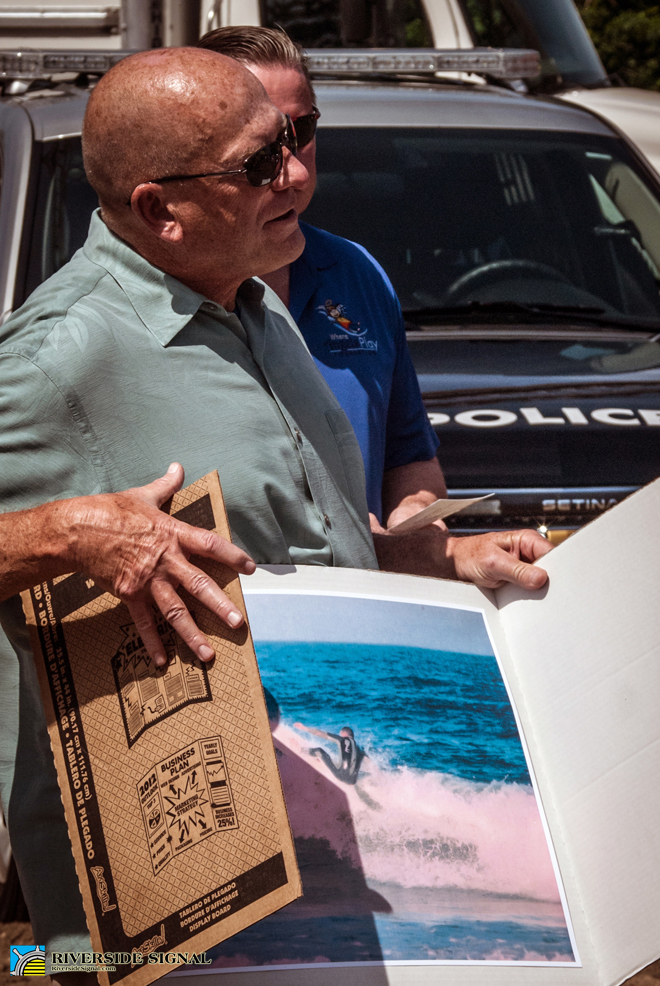 “When we build playgrounds, we try to capture the personality of the individual,” said Mr. Lavin. “Another miracle was George Brown, running into another artist who was able to create benches and personalize them.”

Ptl. Marles’s fellow surfers then pulled dark blue coverings from two hardwood surfboard benches bearing his “271” badge number as well as the name of deceased Elizabeth firefighter Gary Stephens within a red Maltese cross, who was also killed in the line of duty and whose wife is also an Ocean Gate resident and honored for her involvement in the playground project. 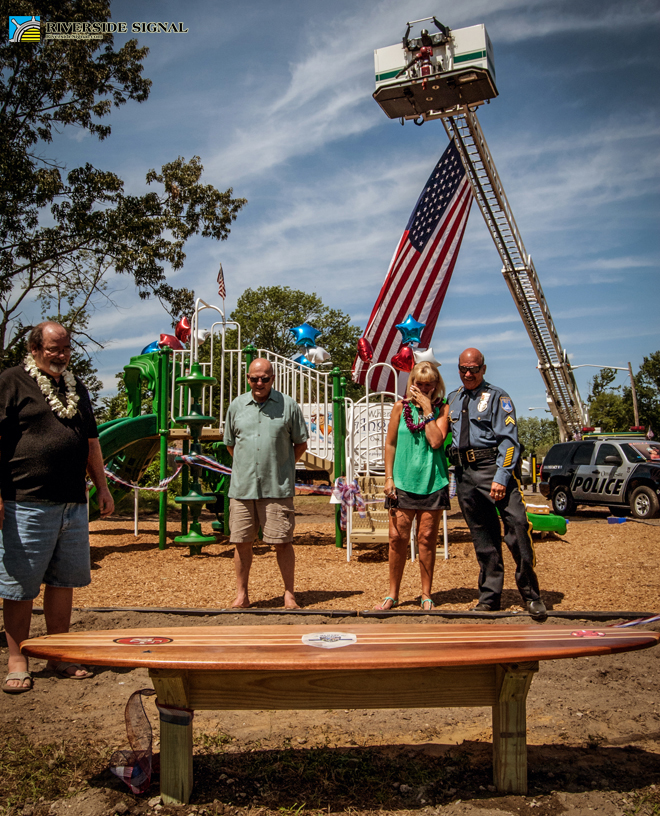 Mr. Lavin next stated that the funds raised by a recent fundraiser in Ptl. Marles’s name would help “pay it forward” and contribute to future playgrounds in Mississippi and in Wilmington, Massachusetts for Massachusetts Institute of Technology Ptl. Sean Collier, who was killed as part of the killers’ rampage following their terrorist act at and around the Boston Marathon in April 2013.

“From the bottom of my heart, and it goes so deep… thank you to everybody that has been a part of this,” she said. “I said on Friday [at the playground build] that Jay was taken on Thanksgiving, and… my last conversation with my baby was, ‘What time’s dinner tomorrow, Mom?’ and I said, ‘I made you extra stuffing.’ And I go sit at a cemetery on Thanksgiving when everybody’s together with their families, and the other day, I said, ‘Now I have a happy place to come, and I have a bench to sit on.’ And I thank you all for that.”

Mrs. Engrassia also told a humorous story from the previous day, when she was at the playground site following its completion, and loudly chastised a local woman who nearly allowed her dog to pee on the freshly planted rose bush and did allow it to poop near the new flagpole without cleaning it up.

“I just thought that was something funny that I had to share because we kind of ran after her,” she explained as the gathered crowd laughed.

Mrs. Engrassia added that while Jay’s children were unable to fly up from their new home with their mother in Florida for the playground dedication, they had spent a month with their grandparents earlier this summer, would be back to see the playground, and that they all “appreciate that the community and Where Angels Play will never let him just be another police officer who passed, but one who will always be remembered, and we are so thankful.”

Mr. and Mrs. Engrassia then released two heart-shaped balloons, each bearing the words “I Love You,” per their grandchildren’s wishes “to their daddy in heaven.”

“Jay always said he wants to stay in ‘the Gate’ and he has, and you’re making it possible that he stays here,” he said, adding thanks to all involved in the foundation and creation of the playground and presenting Mr. Lavin with a polished bell that related to the famous line in his favorite movie, It’s a Wonderful Life, where “every time a bell rings, an angel gets its wings.”

Mr. Lavin added that “we know that Jay has gotten his wings a long time ago,” asked that the dedication plaque standing at the corner of the playground be uncovered, invited Mr. and Mrs. Engrassia and Jay’s father, Sheldon Marles, to cut the ribbon, and with the opening surf rock guitar notes of the Hawaii Five-O theme song playing on the sound system, the playground was filled with dozens of children screaming for joy. 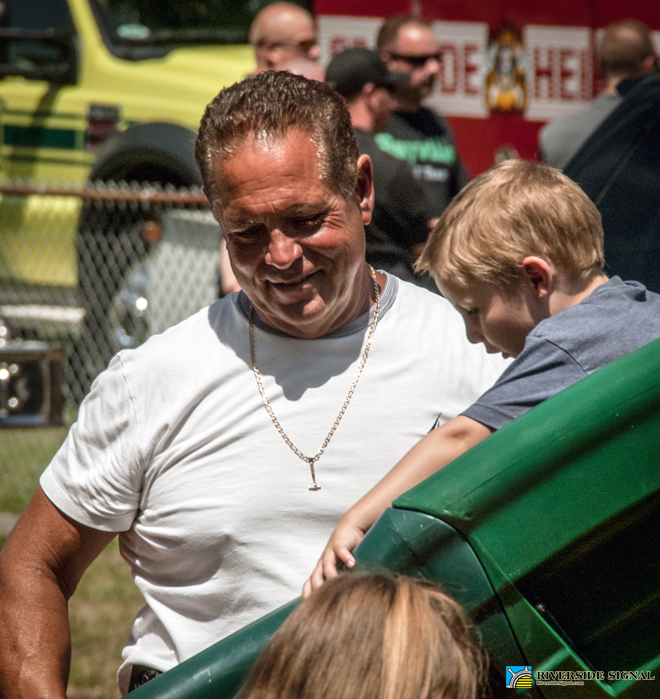